Q: What are the different types of operating systems? Briefly describe. 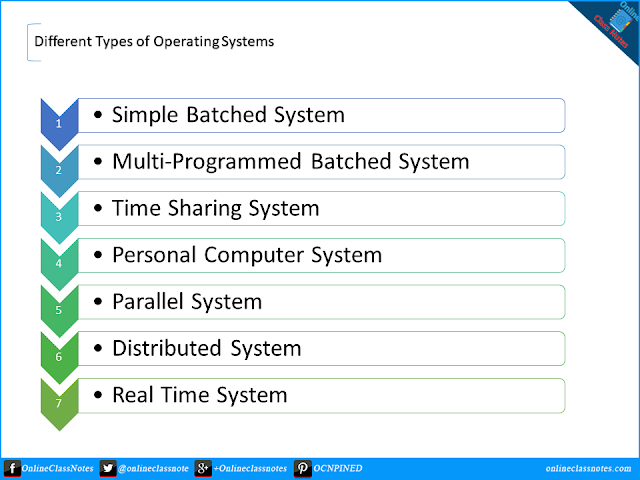 Early computers used to take one job at a time, no input in the middle of the process and also no output either. The jobs were prepared commands for the computer to execute on its side and these jobs were generally written on cards, control cards, which the computer used to read through card readers. After processing the job, the computer used to output the data through line-printer machines or tape drives.
So, the simple batch operating systems were designed to speed up the process by grouping jobs which are similar in nature into one job and execute them and then send back output of each jobs to its programmer. So simple batch systems lack the interaction between the programmer and the machine while it’s running or working on a job.

Time sharing operating systems are extension of multiprogrammed batched operating system and the extension is that here the user can interact with the program running. The CPU scheduling algorithm and allocate small amount time to each job at once and then move on to the next job. Thus the user can get output from the program and can input another command and wait for the output. Keyboard is used to input command and monitors are for output. A time sharing operating system allows many user to use the same computer at the same time such as every user is using his own computer. This is achieved by frequently switching from one program to another and satisfying users with an output from the program before switching to the next one.

Parallel operating systems (also tightly coupled systems) are supposed to be used in machines with more than one processor connected closely where these multiple processors will be sharing memory, clock, buses and other peripherals. Parallel systems are designed to distribute a job to multiple processors to have faster speed. But the speed-ratio is for n processor is not n the times for a single processor. As, when multiple processors cooperate on a task, a certain amount of overhead is incurred in keeping all the parts working correctly. Different model of parallel systems exists, such as symmetric-multiprocessing model where each processors runs a copy of the operating system, these operating systems communicate each other when required. Another model is asymmetric-multiprocessing where each processors get a specific task to do. A master processor controls other processors and maintain the workflow. This is a master-slave situation where slaves’ checkout for tasks from masters or sit idle.

Distributed Systems (also loosely coupled systems) are also multiprocessor systems but they will not be sharing clock, memory etc. and will be communicating with each other with high speed buses, telephone lines etc. Processors in distributed systems may vary in size and function and include microprocessors, workstations to large general-purpose computers. Some of the reasons for building distributed systems are resource sharing, computation speed up, reliability, communication etc.