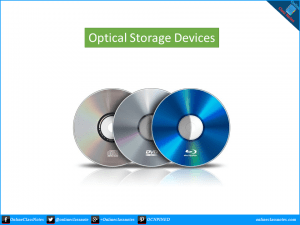 Optical storage devices are flat, round disks that spins around its center. The difference with magnetic storage device is that in optical storage devices LASER light is used to read and write data in disks. Examples are CD, DVD etc.
There are two types of optical disks; one that can be written for one time only and another which can be used to write data more than one time, these are called re-writable disks. Some optical disks can store data on both sides of the disk.
Optical disks are cheaper than magnetic storage devices. But data stability of these disks depends on their use and maintenance. Optical disks do not provide huge storing capacity like magnetic devices. However, now a days, Blue-ray disks are coming up with nearly 20 GB of space which is huge. Common DVDs provide nearly 4.7 GB of spaces and others provide below this. These disks require drives to operate. Such as DVD need DVD driver. Again to write on disks the driver needs to be able to write on to disks, Such as to write on writable or re-writable DVD disks will need DVD writer. Optical disks are easy to remove from the drives and can be used of data travelling.
Optical disks are most commonly used for storing and sharing audio, video, games, software etc. though these disks can be used for storing any kind of data.