Analog Computer: An analog computer is a form of computer that uses the continuously changeable aspects of physical phenomena such as electrical, mechanical, or hydraulic quantities to model the problem being solved. As an analog computer does not use discrete values, but rather continuous values, processes cannot be reliably repeated with exact equivalence.
Digital Computer: A digital computer is form computer that uses letters and numbers as inputs in processing and displays the result in monitors or other forms of output devices and can also store the output in memory to be used later.
Following are some key differences between digital and analog computer 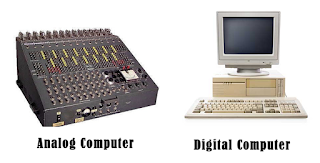