There are 4 kinds of digital computers in respect of their size, cost and working efficiency;such as (a) Microcomputer (b) Minicomputer (c) Mainframe Computer and (d) Super Computer 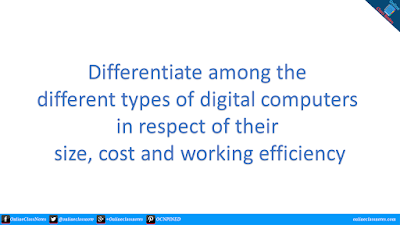 ‘Mirco’ means very small. Thus as it’s name implies, microcomputers are small in size and built with microprocessors. It has CPU, ROM, RAM storage and I/O interfaces. This sort of computers costs less than others and is good for personal use, this is why these are also called Personal Computers. Desktop, Laptop computers are microcomputers.

Though minicomputers are a little larger in size than the microcomputers but it is called mini because of its working efficiency which is far more when compared to its size. It can handle much more input and output operations than microcomputer. Most powerful minicomputers can server I/O requests of hundrades of users at a time using terminal.

Mainframe computer are large and powerful. It can perform a large amount of tasks. It can send numerous amount of data within a single second through its I/O devices. Largest mainframe computers can handle processing needs of thousands of users at any moment. These computers can generally be used in insurance companies, banks etc. where many people frequently need to use the same data at the same time. These are very costly.

Super computers are the most powerful computers. Physically these are the largest computer. They are the speediest computers than any other of the world. Super computer has been used in mapping of human genome, forecasting weather and modeling complex processes nuclear fission. There are a few numbers of super computers in the world.