Depending on implementation computers can be classified into 2 ways, such as, (a) General Computer (b) Special Computer 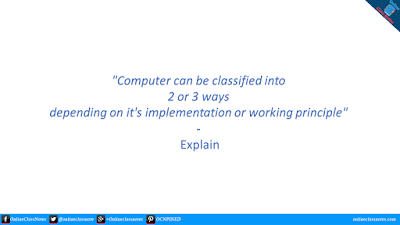 Special purpose computers are computers which are designed and built for performing one or a set of predefined function or operations. Users are not allowed to install new programs in it, but may update the existing programs.
Depending on working principle computers can be classified into 3 ways, such as, (a) Analog (b) Digital (c) Hybrid computers

Analog computers are mechanical devices, weighing several tons and using motors and gears to represent data. Analog computers can change in its phase according to the analog signal and its input from pressure, temperature, vibration, spinning etc. Analog systems represent data as variable points along with a continuous spectrum of values.

Computers which uses digits and numerical calculations to process the data are digital computers. It breaks all types of information into tiny units and use numbers to represent those pieces of information. Digital computers also work in very strict sequences of steps. This type of computers output graphically using a various types of output devices such as monitors, printers, speakers etc.