RAM (Random Access Memory) is a volatile memory which is used by the CPU as the Primary Memory of the system. CPU stores frequently used data of the programs running at a moment in RAM as RAM is faster than storage devices, this helps the CPU to work faster.
Cache memory is faster than the RAM but comes with very small capacity. CPU stores more frequently used data in it so that the CPU can access these data faster.
Both RAM and cache memory are used with the same target which is speeding up tasks.
Following are some differences between RAM and Cache Memory 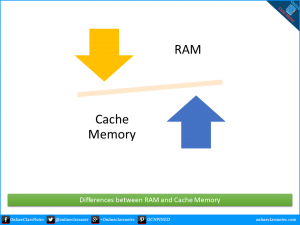 Differences Between RAM and Cache Memory: