The most common type of computer is desktop computers. It has been designed to sit on a desk. Today’s desktop computers are much more powerful than the others and used for an amazing array of task. Not only do these machines enable people to do their jobs with greater ease and efficiency, but they can be used to communicate, produce music, edit photos and videos and play sophisticated games and much more. 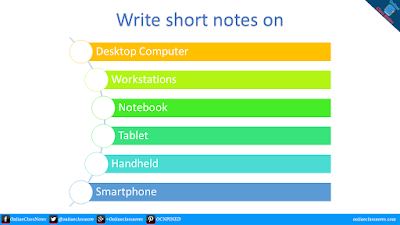 A workstation is a specialized, single user computer that typically has more power and features than a standard desktop PC. These machines are popular among scientists, engineers and animators who need a system with greater than average speed and the power to perform sophisticated tasks. Workstations often have large, high resolution monitors and accelerated graphics.

Notebook computers, as their name implies, has the shape of a 8.5×11 inch notebook approximately and easily fit inside a briefcase. Because people frequently use this device on their lap, they are also called laptop computers. Because of their portability, notebook computers fall into a category of mobile computers – system small enough to be carried by their user.

The Tablet PCs are the newest development in portable, full featured computers. Table PCs offer all the facilities of a notebook computer, but they are lighter and can take input from a special pen – called a stylus or digital pen – that is used to tap or write directly on the screen. Many tablet PCs also have built-in microphone and a special software that take input from user’s voice. Many models even have a fold out keyboard and full size monitor. Some models can also be connected with network systems.

Handheld personal computers are devices small enough to fit in our hands. A popular type of handheld computer is the Personal Digital Assistant (PDA) which is no larger than a small appointment book and is normally used for special applications such as taking notes, displaying telephone numbers and addresses and keeping track of dates and agendas. Many PDA can be connected with larger computer to exchange data.

Some cellular phones look like a mobile phone in shape but it can perform more than what a cellular phone can do and its because these phone offer advanced features not typically found in cellular phones. These are called smart phones. These features may include web and email access, special software such as personal organizer or special hardware such a cameras. Some models even break in half to reveal a miniature keyboard.