Shift in Demand Curve : Shift in demand curve means the change in demand curve. This change will have to be for the change in ceteris paribus. That is when the price of a commodity remains constant and the other things which can affect the demand of the commodity changes, a shift can be found in the demand curve. This shift may be either leftward or rightward, meaning the decrease in demand and increase in demand respectively. …
Explanation : There are various such issues which can affect the demand curve although the price is held constant. Such as, size of family, tastes, incomes, price of other substitutable or complementary goods, other government policies etc. Some descriptions have been given below.
When one’s income rises, one will demand more of a commodity as one will be able to pay more. There may be an opposite effect also. That is, if one’s income rises, one may stop buying that commodity and choose another one which may be a level up commodity. For example, one can stop buying potatoes and start buying fish on the increase in income.
One’s change in taste may also affect the demand curve. That is, after the change in demand, one may start buying based on one’s new taste instead of the previous one. Also a greater taste may bring greater desire which will increase the demand and vice versa.
Again, the price of other commodities is factor. Such as, taking two substitutable food tea and coffee. When the price of tea will rise, the demand for coffee will increase. Alternatively, when the price of coffee will increase, the demand for tea will be more.
Now, considering two complementary food, tea and sugar. If the price of sugar increases, obviously the demand for tea will decrease, as sugar is one of the most needed elements to make tea. Alternatively, the decrease in the price of sugar will affect the demand for tea. 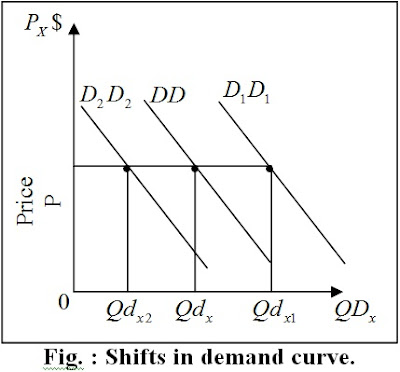 Graphical Representation : In that given figure, the DD is the original demand curve. One demand curve  D1D1 is there right after the DD. This is indicating the increase in demand. Another demand curve D2D2 just before the DD. This is indicating the decrease in demand.
In all that process, the price P is remaining constant at a level, only the various other effects are changing and bringing these shifts in the original demand curve.
Numerical Example : For this example we are taking two complementary goods tea and sugar. Now simply considering the following table,
The above table is showing, the prices of tea and sugar and their quantities. Also, it is showing the changed price and changed demand for these two commodities. Now plotting these values in the following graph to understand it graphically,

From the given figure the explanation of the above given table can be found graphically. The (a) section of the figure is for sugar which is showing the decrease in the demand for sugar for the rise in its price from 10¢ to 20¢. The (b) section is for tea, which is showing that the price of it is remaining constant at 20¢ but the demand is decreasing from 40unit to 35unit. This is happening to tea, only because the price of sugar which is complement to tea has rise.
That’s how, the demand of a product may change or the shifts in demand curve may found for change in ceteris paribus.