Life is full of choices. Because resources are scarce, we must always consider how to spend our limited income or time. In a world of scarcity choosing one thing means giving up something else. If there is no increase in productive resources, increasing production of a first good has to entail decreasing production of a second, because resources must be transferred to the first and away from the second.
The sacrifice in the production of the second good is called the “opportunity cost”. It is so called, because the opportunity to increase the first good entails the cost of decreasing the second. Opportunity cost is measured in the number of units of the second good that are forgone if an additional unit of the first good is made.
Opportunity cost relates with production possibility frontier (PPF). This can be shown as follows.

Relation of opportunity cost with PPF: 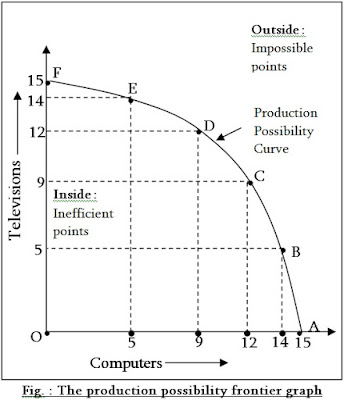