Malicious Software or Malware is any piece of software that disrupts computer operation, steal information, gain access to private systems or display unwanted advertising. Malware causes intentional harm, direct or indirect, to the computer by damaging files etc. or to the user by stealing sensitive information of the user from the computer etc. A software with bug causing unintentional harm is not a Malware. Malware are developed with targets which can be as simple as displaying ads to as serious as deleting or damaging files to stealing bank account or credit card information of the user. 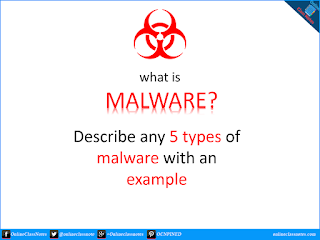 Following are the 5 types of Malware among the various types of malware found so far.

A computer program which remain hidden in user’s computer and when executed, can replicate itself and perform harmful activities like destroying data etc. on user’s computer is called a computer virus. Computer viruses attach themselves to other programs and get executed when user or other programs executes an infected program. Computer viruses can make a computer completely useless by taking up the whole CPU time by creating numerous number of processes endlessly, they can also make use of the empty space on the HDD causing the system goes out of storage etc.
Example: ILOVEYOU is considered to be the most destructive computer virus ever causing damages totaling in at an estimate of $10 billion. 10% of the world’s Internet-connected computers were believed to have been infected.

A type of malicious software which misrepresents itself to appear useful, routine, or interesting in order to persuade a victim to install it. Once installed, Trojans generally contact a controller through internet and gives unauthorized access to user’s computer. A Trojan affected computer may start to perform slower due to heavy CPU or network usage. Trojan are targeted to remain hidden. Trojans are generally spread by some form of social engineering, like appealing email attachment etc.
Example: NetBus is Trojan horse malware created in 1998 with the target to remotely control a system running windows OS. Like any other Trojan, NetBus also has 2 components: the client and server. The server infects the host computer and the client is used to control it.

Computer programs that protect malicious software from begin detected by the system or user are called Rootkits. These are the very difficult to be identified and removed. Rootkits modify host’s operating system to hide in it. It can also hide malicious processes running on the machine from the list of processes that an user can view in their OS.
Example: The first malicious rootkit for the Windows NT operating system appeared in 1999 called NTRootkit created by Greg Hoglund. It was followed by HackerDefender in 2003.

Computer worms are malicious software that generally spread through network vulnerabilities causing harm to host’s network by consuming bandwidth and overloading servers. It can also be targeted with deleting files, steal data or creating botnets etc. Computer worms are like computer viruses except that worms are able to self-replicate and can spread independently where viruses requires an initial execution by the user.
Example: The Morris worm or Internet worm of November 2, 1988 was one of the first computer worms distributed via the Internet. It was the first to gain significant mainstream media attention. According to its creator, the Morris worm was not written to cause damage, but to gauge the size of the Internet.

Ransomware is a form of malware that essentially holds a computer system captive while demanding a ransom. The malware restricts user access to the computer either by encrypting files on the hard drive or locking down the system and displaying messages that are intended to force the user to pay the malware creator to remove the restrictions and regain access to their computer.
Example: In 2012, a major ransomware known as Reveton began to spread. It displayed a warning purportedly from a law enforcement agency claiming that the computer has been used for illegal activities, such as downloading unlicensed software or child pornography. Due to this behavior, it is commonly referred to as the “Police Trojan”.