There are 4 types of connecting devices. They are as follows,

A repeater is a device that receives signals and before it become too weak or corrupted the repeater regenerates the original bit pattern and sends the data. It is like a refreshing station for data while travelling. Some properties are as follows,

A hub is a multi-port repeater. That is a hub can connect more than two segments of a LAN where a repeater can connect only two segments. It also does not have any filtering capabilities like repeater. 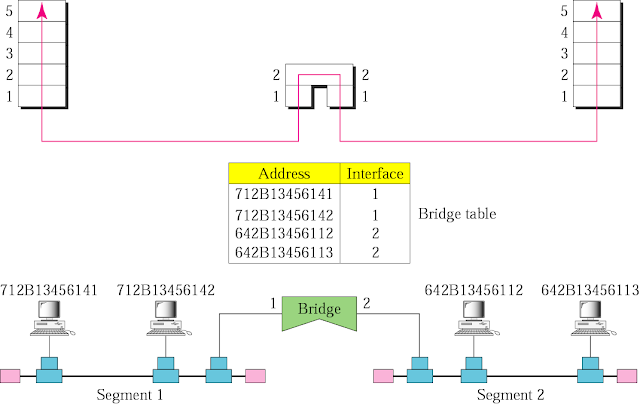 Bridge has filtering capability. It has table that maps addresses to port. A bridge can check the table to decide if a frame has to be forwarded or dropped. Bridges also work in a single LAN. There are some bridges called transparent bridge which can generate its address table automatically by learning the frame movement in the network. 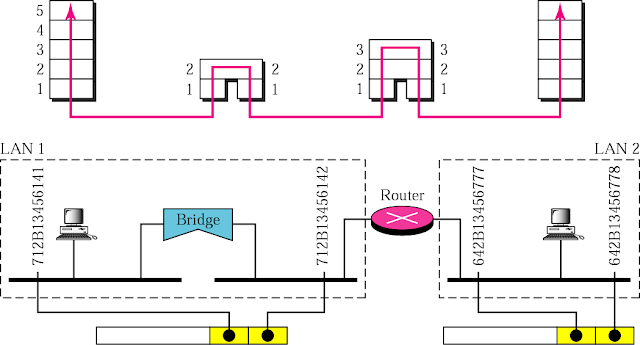 Routers are inter-networking devices as it can connects LAN-LAN, LAN-WAN, WAN-WAN.
Routers can change the physical addresses of a packet. For example, considering a packet is getting sent from LAN 1 to LAN 2 as in the above given figure. At this moment the source address is of the sender’s address and the destination address is of a host of the LAN 2. Now when the packet reaches the router, the router changes the source address of the packet to its own address and then send the packet to the destination address.